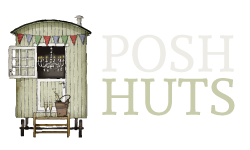 Tucked away in a delightful corner of the Northumbrian countryside, our luxurious shepherd’s huts are a true escape.

A place to lose the pressures of modern life and re-discover the pleasure of dark night skies, enjoying company of friends and family around a real fire as sparks spit and wind their way towards galaxies of stars and waking up to the sound of bird song.

It’s a place to get together and be together. As a couple, as a family or as friends. Wildlife is all around, from buzzards winding in the thermals above to red squirrels curiously gathering nuts from the picnic tables dotted around the site.

Kielder Water is the largest man-made lake in the United Kingdom and provides the perfect venue to try your hand on a range of exciting water sports and activities. Sailing and windsurfing, water skiing and kayaking are all available and tuition is available from various providers.

Anglers have the opportunity to test their skills with fishing opportunities on both stillwater and river.

But Kielder is much more than water sports. The massive Kielder Forest provides a range of outdoor activities such as walking, 4×4 safari and a multitude of mountain bike trails to suit all ages and abilities. We can also provide bicycle hire for you meaning there will be a bike ready and waiting for you when you arrive – Just let us know and we’ll sort the rest out.

And the fun need not stop when it gets dark! Kielder Observatory is the ideal place to discover the wonders of the universe in a spare evening. Kielder is the ideal location for this world class facility due to its “Dark Skies” status.

Northumberland is England’s most northern county with a character all of its own. From the tranquillity of nearby Kielder forest and water to the hustle and bustle of cities such as Newcastle upon Tyne and Edinburgh to a multitude of individual market towns and quaint villages to discover.

Sharing it’s northern border with the Scottish Borders has meant that the region was not always as tranquil as it is today, in fact these “Debatable Lands” were once the scene of much battle and bloodshed. Evidence of these years of turmoil can still be found in numerous castles and defensive houses located throughout the county.

Nearby one of the most spectacular and not a little sinister to be honest, are the remains of Hermitage Castle just over the Scottish Border. Wrapped up in a cloak of myth and legend, hermitage is well worth a visit to experience the unique character and stunning location of the place.

Staying within England, the castles of Prudhoe, Aydon, Belsay and Carlisle are all within easy travelling distance and well worth visiting.

The classic Northumbrian castles of Alnwick, Bamburgh, Warkworth, Lindisfane and the romantic cliff-top ruins of Dunstanburgh are all waiting for you to explore.

The nearby Kielder Castle isn’t really a castle at all, but is a grand former hunting lodge that is now used for exhibitions and a hub of information as to what’s on in the area.

Of course, for anyone interested in our past, a trip to Northumberland will not be complete unless you include at least one visit to The World Heritage Site of Hadrian’s Wall. Built by the Emperor Hadrian beginning in AD 122, the wall runs the entire breadth of the country from east to west. The original intention was to mark the boundary of the Roman Empire but it quickly grew into a series of forts, villages, temples and garrisons along its 73 mile length.

Northumberland is a hugely varied county, with wide open spaces to cycle, walk and explore. From the forest trails of Kielder to the high hills of the Northumberland National Park and the Cheviot Hills.

PoSHHuts provides the perfect base from which to explore the sights, sounds and crucially, the character of this special place, let us introduce you to our world. 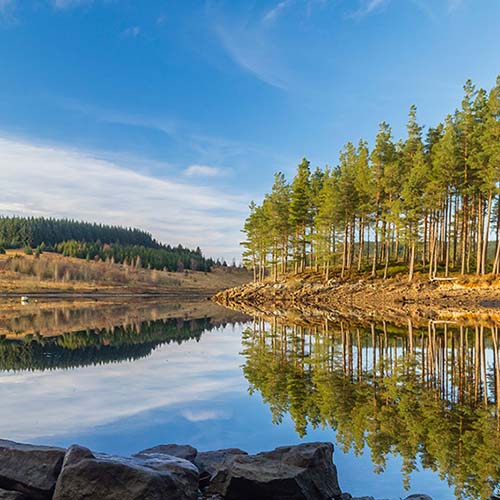 You will find the Forest Bar and other cafes at Kielder Waterside too. Based in the heart of Kielder Water & Forest Park, there is so much for everyone to do, from learning all about astronomy and spotting stars at Kielder Observatory, to running around the forest and reservoir on Kielder Marathon weekend, all you need to do is pick what you would like to do. 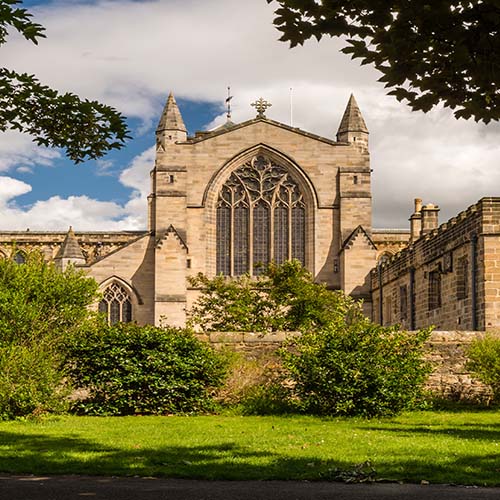 Hexham is an easy drive  from Falstone Barns and whether you have a few hours or a few days, there is plenty to see and do in the old market town.

Clustered around the medieval Abbey there is a lovely park, independent shops, galleries, an Art Deco cinema, theatre and arts centre, walks, fishing, golf and many other activities all within walking distance. 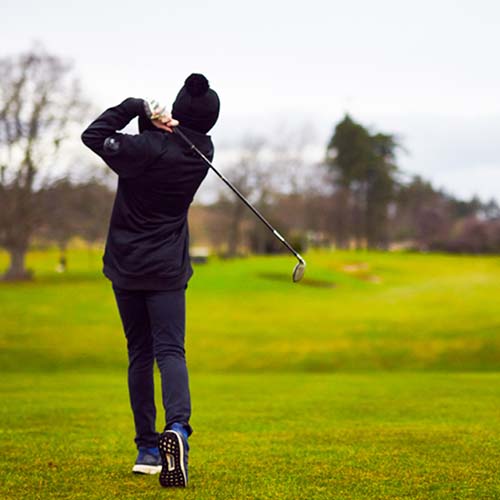 Just 8 miles from Falstone, Bellingham Golf Club overlooks the village of Bellingham in the picturesque North Tyne Valley and features many stunning views of the surrounding Northumbrian countryside between Hadrian’s Wall and the Scottish Border. 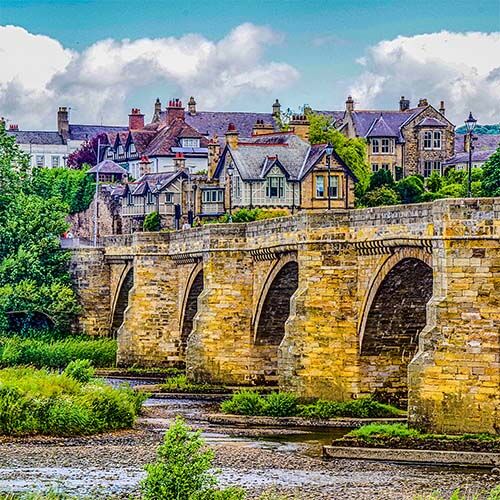 Corbridge is a very pretty market town and within easy reach of Falstone Barns.  You will find an array of independent shops including dress boutiques and homeware stores as well as cafes, pubs and restaurants.

For the history enthusiast, rare Roman armour and the Corbridge Lion, are housed in this English Heritage Roman Town. You can see a time capsule of Roman life inside the museum and then explore the remains of the streets they once walked. 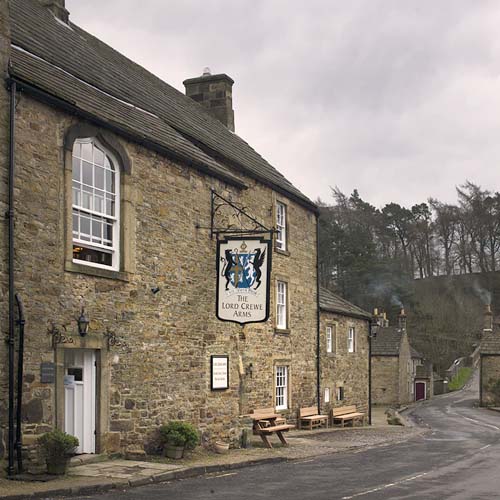 Step back in time in Blanchland, the postcard-perfect, honey-stone village with the rightful reputation as one of the prettiest villages in the north of England.

The village owes its name to the French canons who lived and worked in Blanchland Abbey and were distinguished by their white habits. ‘Blanche’ is French for white, and so the name ‘Blanchland’ was born.

A local shop with an unusual, white-washed postbox, The White Monk Tea Room, which used to be the village school, Blanchland Abbey and the magnificent Lord Crewe Arms are all that you’ll find in this bite-sized village. 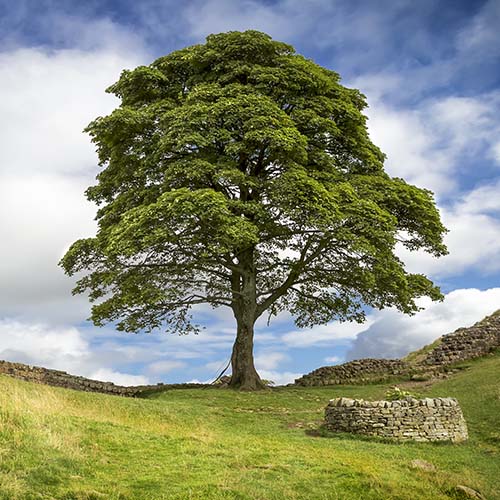 Built to guard the wild northern frontier of the Roman Empire in AD122, Hadrian’s Wall was more than just a barricade; it was a vibrant and multi-cultural occupied military zone of mile-castles, barracks, ramparts, forts and settlements; sprawling almost 80 miles in length from the North Sea to the Irish Sea.

The building of the Wall required vision and an outstanding level of engineering skill. Set amongst the wild beauty of Cumbrian and Northumbrian landscapes, it still impresses today and stands as a testimony to the power and reach of the mighty Roman Empire. Hadrian’s Wall is within easy access of Falstone Barns. 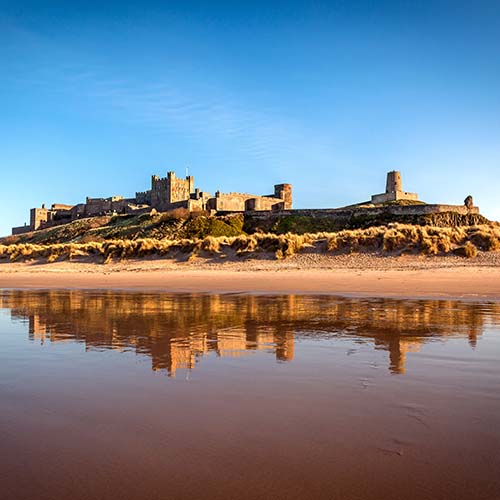 From mighty castles that tower over towns, to once-grand, romantic ruins, Northumberland boasts over 70 castle sites for you to explore.

With a legacy of a turbulent history, they’re scattered along our coastline, perched on rugged islands, and sitting in the hearts of cobbled market towns.

See small-scale remains, fully restored sites that dominate the coast, magical grounds where you can ‘fly’ a broomstick, and even a haunted castle.  The Northumberland coast is within easy reach of Falstone Barns. 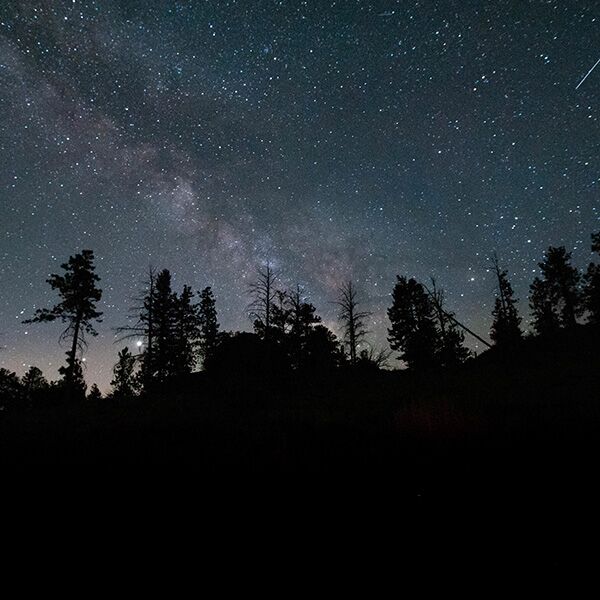 Falstone Barns are nearby the fabulous Kielder Observatory, a  magical and unique visitor attraction under the finest dark skies in England.

Kielder Observatory is one of the most remarkable places to visit in the whole of the UK. A public astronomical observatory which is second to none, under some of the darkest skies in the world where you’ll find “infinite inspiration” and wonders you could never have imagined!

In a beautiful and private rural setting, in the heart of Northumberland National park and next to Kielder Water; these Shepherd’s Huts provide a sublime retreat away from the hustle and bustle of every day life.